Saturday was a day of rest and trying to make sure I got as much healing time in for my feet as possible. I was kind of nervous about how they were going to feel the next day and not running the race was most definitely NOT an option so I had to baby them. 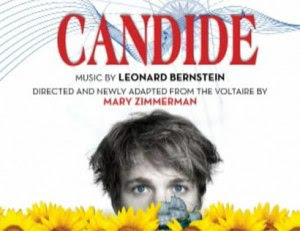 Mike and Rebecca Connelly took us to a matinee of the revival/revamped version of the musical Candide in the Goodman Theater downtown. The music was written by Leonard Bernstein, lyrics by a bunch of guys, “and re-envisioned” by Mary Zimmerman.

Supposedly it was made simpler to follow. It was quite odd as it was. Not sure if I want to see the harder-to-follow version.

But let me say one thing…It was phenomenal! Everything from the singing to the orchestra to the strangely perspective-skewed set was top notch and we all thoroughly enjoyed it. (High praise coming from a quartet of musical snobs!)

After the show, we dodged the two and a half trillion kids going to see Yo Gabba Gabba Live and headed off to an Italian restaurant for some serious carbo-loading. I had no trouble downing a basket of bread and a big ole plate of pasta.

Then it was back to the “flat” for an early night of tossing and turning. I get rather nervous before a race and sometimes I don’t sleep so well. I sure am thankful that we were staying so close to everything because, for a 7:30 start time, we didn’t have to leave our place until after 6:30.

Rachel and I walked up toward Grant Park and since we were getting there relatively close to the start time, we were greeted by quite the mass of humanity. We got a picture of ourselves taken, we stood around for a bit, and then Rachel headed off toward the first meeting point and to hook up with the Connellys.

Before I committed myself to the race by joining with the crowd, I got to talk to a running celebrity. It was the guy who juggles while running. I have forgotten his name and I can’t find it online but here’s a pic: 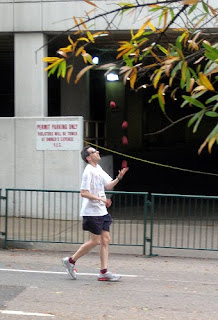 The first time I ever saw him was in my first ever marathon, the Marine Corps Marathon up in DC. I actually got to talk to him this time and he seemed pretty cool.

The start line of the Chicago Marathon is in the north end of Grant Park and runners are herded north on Columbus through the tunnel. It took me almost a half hour to get to the start line but that’s ok. I got to talk to several people as we moseyed forward.

I also got another try at proving my theory of races: The farther back you start, the fewer people pass you.” (I came up with that. It’s copyrighted. Don’t steal it!)

As I waited in the crowd, I met a guy named Jaimie who was running his first marathon ever. He was pretty excited as were his relatives who were hanging with him until the throng started moving. One of his relatives had a big odd and ugly Mylar vampire balloon. He said his wife originally tried to get him to run with it so that they could find him in the crowd. Fortunately he was able to talk her out of that idea and the family members ended up taking it with them so that HE could see THEM and veer toward the balloon if he needed something.

Then there was the quartet of college boys all running the race for the first time together as a sort of defacto team. It was cool to witness that camaraderie.

I also ran into a couple of women, both of whom were running their first marathon. As we reassured each other, I told them, “Just think. After you finish this race, and you WILL finish, you’ll be a marathoner forever!”

We finally made it to the official start line and I remember thinking, “No turning back now!” which is kind of silly but I guess I needed the mental lockdown at the beginning.

Talking to other runners and being nosey about what they do and all that is probably my favorite part of running races. It all comes from a documentary I saw several years ago about a guy who ran the Boston Marathon and filmed his conversations with people as he went. I thought that was the coolest thing and decided to talk to people like that when I ran.

The next guy I met was Chris (I think). He was running his first race of any kind EVER! Crazy dude. He was a Physical Therapy student at a nearby college and really didn’t have a plan for the race. I tried to warn him about the “walls” and told him to wave when he passed me later on in the race. As slow as I went, I never saw him after he stopped for water and I kept going.

Susan was the next person I met and she was a marathon vet. She was trying to do all the high-profile marathons like Los Angeles, Chicago, NY and all that. Her husband was usually the support crew (her version of Rachel) but he decided to run this one (much slower than her) so she was on her own. Her next race was supposed to be London and then Berlin. Not a bad existence.

One of the nicest persons I met along the way (beside the “joggler”) was Bob Spielberger. He works downtown, has run the Chicago Marathon for 12 years, and was planning on going back to his office to do some paperwork after finishing the marathon. As I ran with him, he pointed out historic buildings and made sure I knew where Rod Blogojevitch’s office was located!

We separated at another water stop and I kept going.

I saw Rachel, Punkin’, and Mike here and there along the way but I guess they saw me a couple of times, including the halfway point, when I didn’t see them. They seemed to get around very well and in the end they calculated that they had walked over 7 miles following me around.

I was very amazed at how quickly the miles seemed to be melting away. Before I knew it, I was at 18 miles! I almost let myself believe that this would be the race I finish without walking very much. Famous last words…

Right around mile 18 there was an Accel Gel point where packets of the nutrient replenishing goo were being distributed. I went ahead and took one and by doing so violated the first rule of running. “Don’t do something new during a race that you’ve never done before.” I hadn’t ever had Accel Gel before but I was feeling the need to get something in my belly. Bad idea because within a mile I was getting a very nervous stomach and that was the beginning of the end for Mr. Roger.

I had to walk an awful lot after that but found myself surrounded by many, many others in the same boat. As it warmed up, and it ended up in the 80’s, there were more and more people dropping out and needing attention by the side of the road. Fortunately, the marathon officials learned their lesson from a few years ago and had plenty of medical personnel along the route to assist runners in need.

One very cool thing was the neighborhoods through which we ran/walked. We went through Chinatown, Little Italy, Little Mexico, there were little patches of Koreans and other ethnicities that were all out cheering on the runners. We passed Elvis, a fortune cookie factory…There was even a mariachi band that I’ll bet was out playing for most of the day. More power to ‘em.

As we came up to the last few miles, my brain started getting a little “altered.” I started thinking about Charlotte and why I was there and started getting pretty emotional as we turned north on Michigan Ave. for the last three or so miles.

What kept me from losing it was the annoyingly loud music that blasted from huge speakers located about every tenth of a mile along Michigan. I also saw the “joggler” guy and we moseyed together for a little bit until we turned the corner to head up the hill before turning into Grant Park and the last tenth or so. I guess The support crew was there cheering me on at the end but I never saw or heard them. I did finish running but it wasn’t very pretty.

The best part of the entire run was the free beer they gave out at the end. MAN! Was that tasty! And they gave everyone TWO of them! One at the finish line and one at a special booth at the “Runners’ Park.” I also got a quick massage there from two therapists and started looking for Rachel and the Connellys.

I actually had to walk back past the finish line to the forest-of-metal-guys piece of art to meet up with them. Mike actually had to leave to relieve grandma who was watching their son so it was just the girls waiting for me. 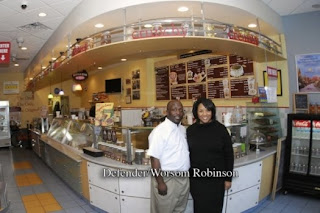 On the way back, I wanted to stop for ice cream and we popped into a shopcalled the Marble Slab Creamery that was right on the way. The owner saw me and a couple of other runners and gave us all free ice cream! What a great way to end the day.

The next day was Monday and after one last visit with Rebecca and the very verbal rug rat, we headed home with little fanfare. It was interesting to see the number of people wearing their metals as they walked through the airport.

Let me just say this about Chicago: For all the corruption that everyone keeps talking about, everything works. The marathon was very well organized and run and as we were walking back, they already had the streets pretty much cleaned. I was very impressed.

One of the street sweepers was painted up with White Sox logos and the one right behind it had Cubs colors.