Some stuf:  Part of the ComedySportz Improv Theatre mantra is, "Yes, and..." which, to me, means that when I am presented with a challenge, I accept it and add to the development of a resolution.  Even if I am a tiny cog in the machine, my little part might help things along.

We need banks/financial institutions/check cashing stores in the Central Virginia Region willing to waive check cashing fees for our families.  We want ALL of our financial assistance grants going to the families and their actual bills.

First Community Bank will do this because they are our bank and the checks are drawn on our account with them so that's normal but there are families who don't live near a FCB and don't have a bank account anywhere so they have to go to a check cashing store which charges 5-10%.

If you are affiliated with an organization that can help with this, please let us know.

There's nothing to gain for the organization.  It's just the right thing to do and we will be very appreciative.  I'll be more than willing to come in and meet with you or your manager to discuss options.  Just let us know.

What can we say about January 7, 2010 that hasn't already been said?  Not much.  Doesn't make us think about it any less.  Doesn't lighten the load of remembering. Doesn't convince the bus driver to go park somewhere else.  It still pretty much sucks.

So what I'd like to do on this third anniversary of Charlotte Jennie's metamorphosis is to offer you music that reminds me (Daddy) of her.

The Great Remember from the CD Rare Bird Alert is the latest tune that has her spirit all over it.  The moment I saw this video of Steve Martin playing his original clawhammer banjo composition during his tour with the Steep Canyon Rangers, I thought of her. It has a beautiful, yearning melody and yet there are still wonderful elements of Martin's humor as he tunes before he plays.

Radiance is a vocal version of a Keith Jarrett improvisation recorded by Julia Dollison and Kerry Marsh.  I believe Kerry's sister put together the video slide show.  It's heartbreakingly beautiful and very difficult for me to watch.

Charlotte certainly loved Dora The Explorer.  She learned several Spanish words and phrases watching Dora and after her first surgery, when she started being able to speak, she counted to 10 in Spanish for us.  It meant an awful lot to hear her do that.

The Chanticleer version of Franz Biebl's Ave Maria is another heartbreakingly beautiful piece and I can't hear it without thinking about Charlotte and becoming a blubbering mess.  (The link comes complete with fireplace)

I believe someone introduced us to  "Two Thumbs Up" by Johnny Bregar after Charlotte died or near thereabouts.  It has become one of our official theme songs and Johnny has been tremendously generous to give us permission to do pretty much whatever we want with his recording.  We promise not to abuse that trust.

Here's another song that someone sent to us after Jan 7, 2010.  It's Jonatha Brooke's version of Woody Guthrie's, "New Star."  The lyrics are actually fairly odd but it came to us at the right time and now it has all kinds of meaning Woody never intended, I'm sure.

Of course, you didn't think I was going to leave out the Disney angle, did you?  Let's start with the last movie Charlotte saw in a theater, The Princess and the Frog.  There isn't a tune on the soundtrack that DOESN'T make me think of Charlotte and there was a time when I would obsessively listen to it every morning when opening up at Romp n' Roll (much to the chagrin, I'm sure, of the rest of the staff); however, I will include my favorite song from the movie, "Gonna Take You There."

How about some Little Mermaid?  "Part of Your World" seems so ubiquitous; so completely over played but it's a Charlotte song so I don't think I will ever get tired of it.

Next comes Mary Poppins.  I don't remember exactly when this movie became one of Charlotte's favorites but all of a sudden, it was all she wanted to watch.  So here's "Let's Go Fly A Kite" which has become one of our unofficial theme songs.

Last but not least by any stretch of the imagination, here's Charlotte's favorite version of Charlotte's favorite song, Frosty The Snowman by Dan Tyminsky.  We actually have a video of Charlotte dancing and sort of doing karaoke to this song.  We also have video of several former NFL players singing this to her on her birthday on July 9, 2009 in the the Nelson Clinic at Children's Hospital of Richmond.  THAT was something to see!  Waddya know? You can!  Here!

I'm sure I've left off dozens of songs and I'll probably be adding a tune here and there for days.  Please feel free to add your own song if it reminds you of CJ.

Today, we invite you to have a chocolate milk toast in honor of Charlotte and if you'd like, eat some "dadoo" (Cheerios or "round cereal") and mac n' cheese. 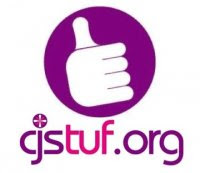 On January 6, 2010, CJ's Thumbs Up Foundation was officially incorporated, the first step in our process towards 501(c)3 status.  In the three years of our existence, CJSTUF has provided assistance (financial, material, and emotional) to well over a thousand people (children with chronic and life-threatening illnesses, their caregivers, and families).

We couldn't have done it without the support of our fabulous and generous Network.  You have answered every call for votes, donations, and time and for that we are grateful beyond measure.  We blew away all of our budget/revenue projections for the year and are extremely stable heading into 2013.


More importantly, you have helped us ease the burden of many families facing the worst scenario anyone could imagine.

The future is looking extremely bright for the Foundation and our pipe dream goals are seeming a bit less like pipe dreams than they did before.  Please stay tuned for some great upcoming events including CJ's Thumbs Up Ball in February, TEAM CJ's participation in the Monument Ave. 10K on April 13, and CJ The DJ's Bluegrass (Mostly) Boogaloo on Sat, July 20.  There will be a few surprises as well so pay attention.

Thank you, also, for helping US deal with our own grief as well.  Doing what we do is as much therapy for us as it is beneficial for our families.

We wish you peace for the coming year but hope you will also help us partake in a little excitement for CJSTUF along the way.